A Winter to Remember! A Season of Extremes Across Canada

Oakville, Ontario, Nov. 30, 2020 – Blizzards, record cold and record heat have all grabbed headlines across Canada during the fall of 2020.  While we have seen some historic early winter weather, very warm weather has fought back at times and kept traditional winter weather from locking in across much of the country. Will this wild pattern continue? To answer this question, The Weather Network has released their winter forecast looking ahead to what we can expect during December, January, and February. 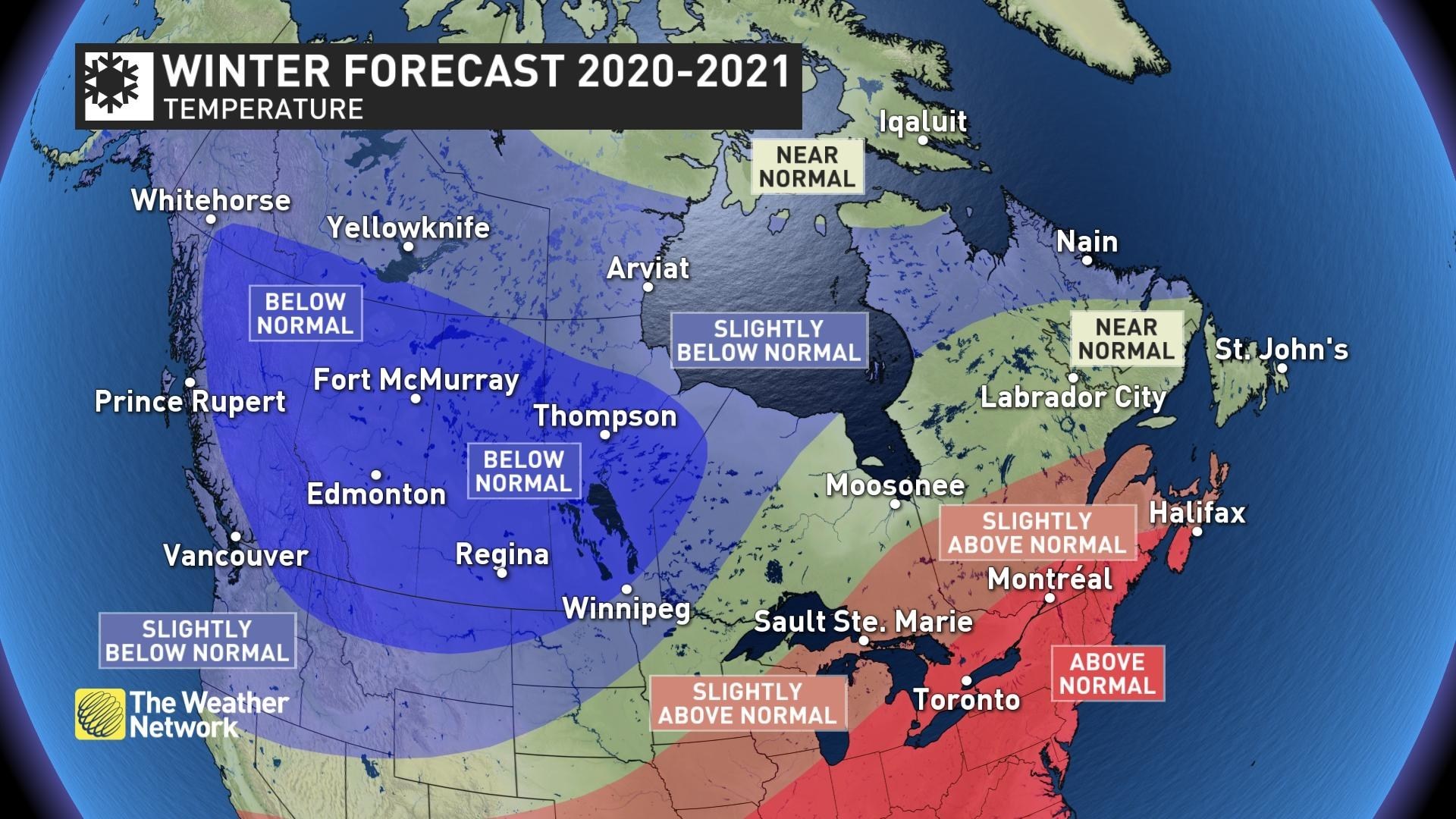 “This winter will feature a wide variety of extreme weather across Canada,” said Chris Scott, Chief Meteorologist at The Weather Network. “The focus of the severe cold will be across western Canada, especially during January and February. Meanwhile, extended periods of mild weather are expected from the Great Lakes to the Maritimes with the potential for record warmth. However, arctic air will also push into these regions from time to time, and an active storm track coast to coast will deliver an abundance of snow and ice to most of Canada.”

Here is a more detailed look at what we can expect across the country from our winter of extremes:

British ColumbiaColder than normal temperatures are expected across B.C., especially during January and February with a heightened risk for extended periods of frigid weather and heavy snow. Above normal precipitation is expected for southern parts of the province, and an outstanding ski season is anticipated with an abundance of fresh powder to enjoy.

PrairiesA frigid winter is expected across the region. While the first half of December will bring periods of very mild weather, we expect that this region will lock into a much colder pattern for January and February with a heightened risk for extended periods of severe cold.  A snowy winter is also expected across the southern half of Alberta and parts of southern Saskatchewan. Near normal snowfall is expected elsewhere.

Ontario and QuebecDecember should bring a period of consistent early winter weather, but we expect January and February will bring extended periods of very mild weather. However, the frigid air to the west will attempt to press into the region at times, and an active storm track across the region will bring a heightened risk for major winter storms with heavy snow, ice, and rain. Northern Ontario will be the battle zone between frigid weather to the west and mild air to the south. This will result in changeable temperatures and near to above seasonal snowfall.

Atlantic CanadaA mild pattern is expected to dominate across the Maritimes this winter, primarily during January and February. Near normal temperatures are expected for Newfoundland. An active storm track will bring above normal precipitation to much of the Maritimes and near normal precipitation to Newfoundland and Labrador. However, a variety of different storm types and tracks are expected with a heightened risk for rain and ice at times.

Keep in mind that winter brings rapidly changing weather and dangerous travel conditions throughout Canada.  Canadians should pay close attention to the daily forecast and be prepared for changeable weather by visiting www.theweathernetwork.com or by downloading The Weather Network App and creating an account for personalized and up-to-the minute forecasts.

Winter Retreats, But When Will It Surrender?
Scroll to top