Winter Weather Whiplash! A Stormy and Changeable Season Across Canada

OAKVILLE, ON, Nov. 29, 2021  – Record warmth, devastating floods, and even a blizzard have all grabbed headlines across Canada during the fall of 2021. While we have seen a few quick shots of early winter weather, consistent cold has been lacking so far across the country. Will this mild and stormy pattern continue through the upcoming winter? To answer this question, The Weather Network has released their winter forecast with a look ahead to what we can expect during December, January and February. 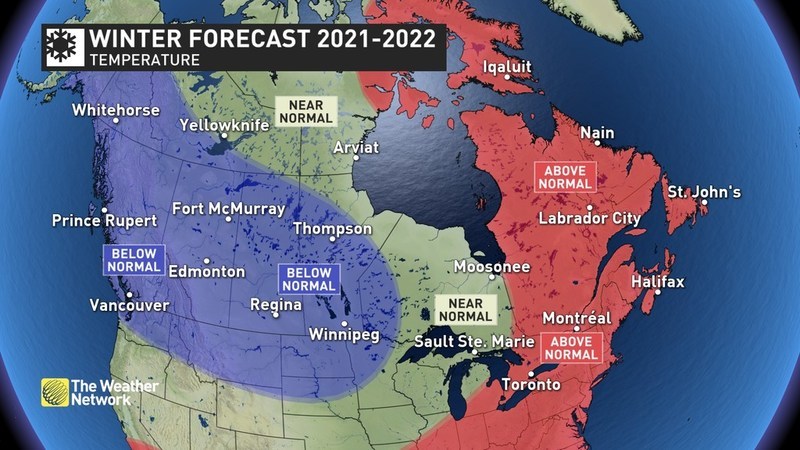 “Canadians should be prepared for winter weather whiplash over the coming months,” said Chris Scott, Chief Meteorologist at The Weather Network. “A La Niña weather pattern in the Pacific Ocean will support an active storm track across southern Canada, leading to above normal precipitation and snowfall for southern parts of B.C., Alberta, Ontario and Quebec. However, stretches of mild weather will seemingly wipe away winter at times, especially from southern Ontario to Newfoundland.”

Temperatures are expected to average near to above normal across central and Eastern Canada, while temperatures across Western Canada will average below normal.

Here’s a more detailed look at what we can expect across the country during the upcoming winter season:

British ColumbiaA stormy pattern is expected to continue across southern B.C. with above normal precipitation. This will bring an abundance of snow to the alpine regions, and at times significant snowfall across lower elevations as well, setting the stage for an extended ski season. Colder than normal temperatures are expected to dominate the season, especially during January and February, and linger well into March.

Ontario and QuebecA ‘come and go’ winter is expected with periods of stormy winter weather, followed by extended periods of mild weather, including a prolonged thaw for southern areas. An active storm track will bring an abundance of snow to much of the region, but many storm systems will bring a messy mix of snow, ice and rain, especially across southern areas. While December should bring a period of traditional early winter weather, the heart of the season will lack persistent severe cold.

Atlantic CanadaA mild pattern is expected to dominate across the region this winter with above normal temperatures overall, especially during January and February. Our forecast calls for near normal precipitation, but parts of the Maritimes could see below normal snowfall totals as many systems will bring a mix of snow, ice and rain to the region.

Keep in mind that winter brings rapidly changing weather and dangerous travel conditions throughout Canada. Canadians should pay close attention to the daily forecast and be prepared for changeable weather by visiting www.theweathernetwork.com or by downloading The Weather Network App and creating an account for personalized and up-to-the minute forecasts.

Interview opportunities: The Weather Network meteorologists are available for interviews to provide additional details and localized insights about this year’s Winter Forecast.